Passive Income: A Panacea for Fear

On Thursday of last week, as market’s plummeted intraday, I was on the edge of my seat, excitedly watching the S&P 500 tick lower, hoping that it would hit the -20% threshold, which would trigger a cash infusion event within my personal portfolio regarding the bear market savings that I’ve stashed away for just the occasion.

For your information (for newer subscribers here, mainly): I discussed my plans for success in a bear market, including my bear market savings and allocation plans, in this Durable Dividends article that was published back in January.

Unfortunately (for me, anyway), the S&P 500 bottomed just points away from that -20% bear market threshold and I wasn’t able to put those bear market funds to work (rules are rules, after all).

The market rallied off of that near -20% bottom on Thursday, with the S&P 500 rising more than 1% off of its intraday lows.  This was upsetting to me, but I told myself, “There’s always tomorrow,” knowing that the last couple of Fridays had been in the red.

I speak with retail investors on a daily basis and throughout this 2 day period, the attitudes of the majority of the people that I spoke with were the exact opposite from my own.

On Thursday, when I was excited to see the market dip, many individuals that I spoke with were nervous, anxious, and fearful.

And, on Friday, when I was bummed out because I knew that I wasn’t going to have the opportunity to buy blue chips into weakness with my bear market funds, many of those same people were elated, because of the market’s positive momentum.

Now, over the long-term, I definitely want to see markets trend higher.  But, as someone who understands the rare opportunities that bear markets present, I definitely wouldn’t mind seeing the fearful sentiment surrounding the major averages these days push them lower because I’m already seeing attractive valuations attached to blue chips and I would love to continue to accumulate these stocks while they’re in the bargain barrel.

In short, as I’ve said several times here recently, I celebrate sell-offs.  Not because I’m a masochist, but because I adore the opportunities that they provide.

The other day, a subscriber said something along these lines to me, “Nick, can you please stop your bear market rain dance for a minute.  I don’t think my anxiety can handle another day like yesterday [referring to Thursday’s massive sell-off].  I just want one Friday in the green.”

I responded, “Focus on your passive income instead of short-term market volatility and that anxiety will disappear.”

And, this is the theme of this week’s Durable Dividends newsletter…

Yes, I continue to focus on bear market mindsets here, and I know…I’m starting to sound like a broken record…but, the fact is, bear markets are times when patient and disciplined investors can really accelerate their journeys towards financial freedom and therefore, I’m happy to echo similar sentiment, again and again, because I would hate it if investors later came to regret that they missed out on this opportunity because of short-sighted fear.

Just this weekend, I came across a couple of reports from major financial firms which highlight their belief that Friday’s rally is likely to be short lived –  typically bear market bounce – and with that in mind, I think it makes sense to prepare readers for the potential of an ongoing and deeper sell-off.

Goldman Sachs just cut its year-end S&P 500 target from 4,700 to 4,400 (which still implies nearly 10% upside from here), largely on the heels of increased recession risk.

Goldman strategist, David Kostin, wrote, “Our economists assign a 35% probability of recession in the next two years.  However, if by year-end the economy is poised to enter a recession in 2023, a combination of reduced EPS estimates and a wider yield gap would drive a lower index level.”

In the event of a recession, the Goldman team suggested that the S&P 500 would fall towards the 3,600 level, implying ~11% downside from today’s prices.

Morgan Stanley also published a report over the weekend which said that relatively lower valuations, low RSI, and the idea that rates could stabilize in the ~3% area where they currently sit, has sparked a strong rally in equity markets.

But, the Morgan Stanley report clearly dated that they believe that this rally will prove, once again, to be a short-lived bear market bounce with strategist Mike Wilson saying the firm is “Confident that lower prices are still ahead.  In S&P 500 terms we think that level is close to 3,400, which is where both valuation and technical support lie.”

Wilson notes that rising rates should push equity valuations down to the 14-15x level, which is notably lower than the ~16.5x level where they currently sit.

I’m sure these aren’t the types of headlines that anxious investors wanted to read over the weekend.  But, it’s important to note that while these calls are admittedly bearish, they’re still relatively short-term in nature.

The vast majority of the reports that I’ve read recently coming out of reputable firms and/or from fund managers who I respect and trust are saying that a recession sparked by the Fed’s normalization process will likely be a relatively light one.

Yes, rising rates equate to increased risk, but I don’t believe that a deep or long lasting crash is in the cards (at least, barring some unforeseen black swan event).

Therefore, I’m looking to tactically and opportunistically take advantage of any near-term weakness in the markets because I have very little doubt that in 3-5 years, I’ll be very grateful that I did.

Speaking of data that supports a longer-term bounce back, I saw an interesting tweet from Jason Goepfert, Founder, Sundial Capital Research, last week which noted the stark level of bearish sentiment in the markets and what this likely means, as far as mean reversion goes.

In other words, when fear pervades the market, the right mindset to have is an aggressively bullish one.

And I know going against the grain in that regard can be difficult to do (especially with the threat of recession looming and the economic uncertainties attached).

But, getting back to my comment to a subscriber earlier in the week…a focus on one’s passive income can help.

I am able to confidently buy into weakness in the equity markets because I know that by accumulating dividend growth stocks, I’m augmenting the size of my passive income stream.

And therefore, I’m increasing the compounding potential of my portfolio over the longer-term, as the dividend re-investment process allows my passive income to snowball into great and meaningful portions, in terms of its ability to support me financially.

Those red dots are the 18 days in which sentiment fell into the negative range that we saw on the 12th.

As you can see, regardless of short-term fear, the market always bounced back (usually, in a very major way).

Yet, while the S&P 500 has trended higher over the long-term, the ride has been a fairly bumpy one, with a handful of very scary drops along the way.

It’s during moments like these that investors must keep their eye on the ball, or else, they could end up making emotionally driven mistakes which set them back years – or potentially decades – with regard to their journeys towards a comfortable retirement.

Here’s a graphic from a recent article that I posted, highlighting the passive income that my personal portfolio has generated over time:

This data only dates back to 2014 (I wasn’t compiling my monthly dividend data prior to that); however, as you can see, the trend (and trend line) here is much more consistent.

The dividend growth process is much more predictable and reliable than the near-term volatility that the stock market experiences.

This is why I’ve adopted the dividend growth investing style (I much prefer relying on predictable, fundamentally-driven data as opposed to the sentiment-driven price action that I’ve seen in markets over the years).

And, as someone who plans to live off of the passive income that my portfolio generates in retirement, this is the only data that truly matters to me (in terms of my family’s financial health).

Everything else is just noise.

And, instead of falling prey to distractions – or worse, fear – in today’s market, my focus on passive income, and taking steps to continue to grow my passive income stream, allows me to stay calm, rational, and disciplined.

I rest easy at night when the markets are red because I know that lower share prices equal higher yields on cost.

Higher yields on cost equal more dividend dollars being generated by my savings.

And, more dividend dollars equals an expedited journey towards my eventual retirement destination!

It’s as simple as that…

This article is intended to provide information to interested parties. As we have no knowledge of individual circumstances, goals and/or portfolio concentration or diversification, readers are expected to complete their own due diligence before purchasing any stocks mentioned or recommended. It does not guarantee that securities mentioned in this newsletter will produce profits or that they will equal past performance. Additionally, we are not an investment advisor and do not offer securities or tax advice. Although all content is derived from data believed to be reliable, accuracy cannot be guaranteed. Nicholas Ward, contributors and staff members of Wide Moat Research may hold positions in some or all of the stocks listed.

Nicholas Ward is a research analyst who currently writes for Seeking Alpha, The Dividend Kings, iREIT, and Forbes Real Estate Investor. Before that, he was Founder and Editor-in-Chief of The Dividend Growth Club, as well as the Income Minded Millennial. Nicholas has also contributed to Sure Dividend, Investing Daily, and The Street, where he covered stocks in Jim Cramer's Action Alerts PLUS Portfolio.

Nicholas holds a bachelor of arts from The University of Virginia, where he studied English and studio art. Prior to transitioning into the financial industry, he managed a vineyard in the foothills of the Blue Ridge Mountains. 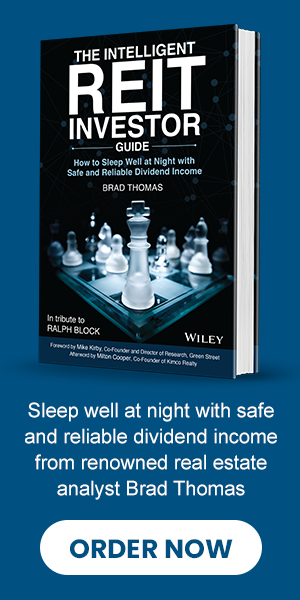